KRONE and Lemken have joined forces and come up with an autonomous machinery concept called Combined Powers. 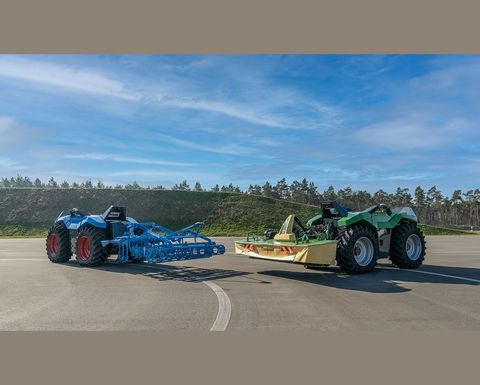 The system is described as a ‘process unit' that consists of a drive unit and various implements which can be attached to the front of the drive module.

Combined Powers has, according to Lemken and Krone, passed trials in cultivating, ploughing, sowing, mowing, tedding and raking last year, and the concept will now be integrated in the forage harvesting and tillage systems of the two companies.

Combined Powers uses a diesel-electric drive that generates up to 170kW (230hp). The drive power is transferred electrically to the wheels and the PTO and from there to the implement which couples to a conventional three-point linkage.

Operators can control and monitor the combination from a mobile device, transmitting jobs and job reports via a communication module and an agrirouter, (an established data exchange hub).

Krone and Lemken say a feature of the process is that it is controlled by the implement and not vice versa. The implement and the drive unit act as one integrated ‘smart' system.

At the heart of the Combined Powers system is the application of ISOBUS and TIM, available on Krone and Lemken machines. The drive unit and implement communicate and interact, sharing literally all types of data.

Intensive trialling in all types of conditions and generating feedback from farmers and contractors will continue this year.