IF YOU ARE currently doing nothing in terms of pain relief during lamb marking, then it’s time to start doing something, according to Dr Alison Small, CSIRO. 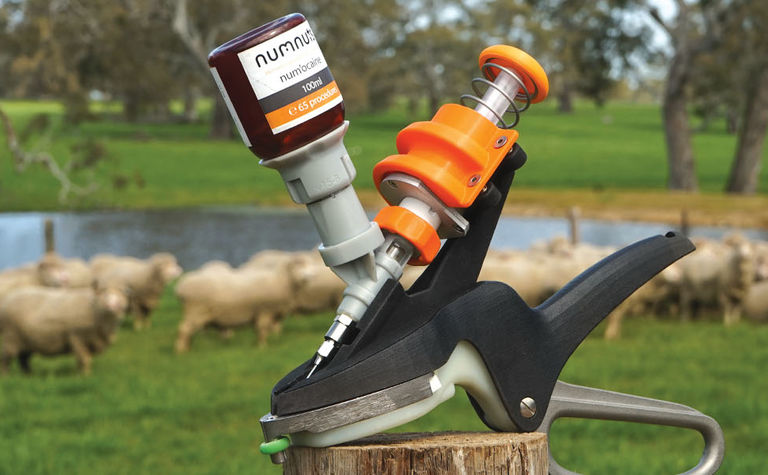 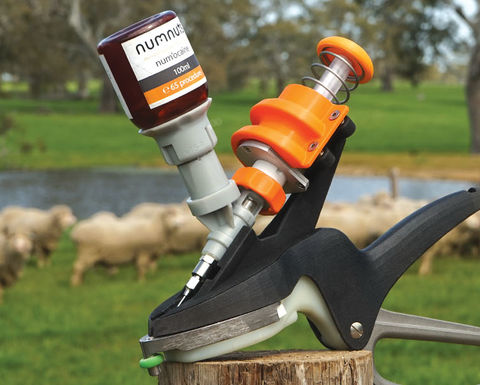 The forthcoming release of Numnuts promises to be a game changer in pain management for lamb marking. Image: 4C Design

Alison, who works in animal welfare, meat quality and standards, has been investigating various pain relief options for livestock, including the soon-to-be-released Numnuts.

Numnuts combines a ring applicator with a local anaesthetic injecting device, enabling the operator to inject pain relief directly where and when required when the ring is applied.

Robin Smith, Senesino Director and Numnuts Founder and Inventor, said everything was on track for a pilot release of the product in Australia in the second half of 2019 ahead of a full commercial release in 2020.

"It had to be practical, safe and quick to use."

Robin is an engineer by training but has a strong interest in animal welfare and a pretty good edigree in the sheep industry. (His veterinarian father Dr David Smith led the team that developed Barbervax and Robin designed the production system for the vaccine.)

Robin said that while Senesino is a design engineering firm, their philosophy was to approach every problem from the perspective of the person who will use the product.
"We're not interested in tech for tech's sake," he said.

"In developing the Numnuts tool, we have looked at the angle of attack, the depth of needle penetration, the accuracy of dosage, and the ergonomics of the design.

"We have developed a more ergonomic and less RSI-inducing tool than other ring applicators and, once fully expanded, takes very little force to keep it open to apply the ring. We put a lot of engineering into making the existing tool better so the additional action of squeezing the trigger to deliver the local anaesthetic is simple."

Robin likened the dose of local anaesthetic delivered by Numnuts to the needle a person might receive in the dentist chair.

"You don't want your dentist drilling in your mouth without you getting the needle first," he pointed out.

"The pain of a ring - on the tail or on the scrotum - takes a minute or two to become an acute, sharp, throbbing pain, just like a dentist's drill or banging your thumb with a hammer. It's that ouch, ouch, ouch feeling. The acute pain phase from the Elastrator ring can last about 60-90 minutes and the NumOcaine drug delivered by the Numnuts is designed to give relief during that period.

"Although we've called it Numnuts, it's equally relevant for tail docking."

If used on all lambs during marking, and assuming a 50:50 ratio of ram:ewe lambs, only a third of the applications of Numnuts would be to testicles; the other two thirds would be to tails.

This means the ram lambs get a double dose of anaesthetic, but, they are receiving a double insult and because the drug is targeted at the precise location and in exact quantity, this is not a problem and is actually beneficial.

It's a bit like if you had a filling in a tooth in your top jaw and one in the bottom jaw as well; you'd want both places to be numbed with local anaesthetic, rather than just the top tooth being numbed and taking your chances with the bottom one.

Alison said that in the trials conducted by CSIRO there was a significant reduction in the number of lambs displaying pain behaviour immediately after lamb marking procedures when Numnuts was used.

"With any assessment of pain, there is a massive grey scale," she said.

"Some lambs are very stoic and will just ‘grit their teeth' and bear it, whereas others will throw a tantrum and roll around on the ground. But with local anaesthetic there is a noticeable decline in the pain behaviour displayed."

The researchers also found that in lambs marked using Numnuts, there was a reduction in mismothering afterwards.

"We timed the lambs going back to their mums after marking," Alison said.

Alison said it would be good to look at lamb losses, but the practicalities make doing so difficult due to the large mob size needed to counter the many complicating factors associated with lamb survival. What is already clear though, is that producers who have been involved in the beta testing of Numnuts are keen to get hold of it because they have noticed a benefit.

"Those who have tried it, are very positive," Alison said.

"One of the consistent pieces of feedback I have had is that things seem quieter in the yards after marking and there is a feeling that the lambs are easier to take back to the paddock."

Robin Smith said up to a 70% improvement in pain management could be expected by using Numnuts.

"But the flipside of that is that some of the lambs will still display signs of discomfort or pain, but at a reduced level," he said.

"It's not a silver bullet, but you will see a drop in pain behaviour. It's not a knock-‘em-dead solution, but it is a significant reduction.

"Like any scientific endeavour, this is a journey. It's not an end point. But we believe that we are at the right point of time to release this now. We will make 500 devices for release in Australia later this year. Initially, they will go out through vets and lamb marking contractors. There is an important side benefit in this in enabling vets to connect with sheep producers."

The anaesthetic in the bespoke Numnuts cartridge, NumOcaine, is a Schedule 4 drug so will only be available through a veterinarian.

Robin said a single cartridge will last for about 40 lambs (tails and testicles) and most producers who mark about 1000 per day will need to change the bottle about once every 15 minutes.

The engineering team have developed a special ‘pain relief cartridge' that is much simpler to use than broaching and tangling with a draw-off tube and allows easy changeover of the anaesthetic cartridges and straightforward replacement of the injection needles.

Marking contractors and farmers involved in the trials have indicated it has proven relatively easy for people to adjust to using the Numnuts device.

"In our trials, about one in every 100 injections into the tail puts the ring on the bone instead of in the gap between the knuckles," Robin said.

"Our observations have been that most farmers are docking tails too short when compared to best practice vet guidelines of below at least the third joint."

"The ‘engineering' of the Numnuts device won't allow it to discharge into bone, so when the operator hits bone, they need to readjust the positioning. That makes them think about where they need to put the ring introducing a feedback loop; they need to look out for the knuckles and that may improve tail length."

The pilot release of Numnuts will coincide with the Australian Veterinarian Association Annual Conference in Perth in May 2019 and the full commercial release will follow in 2020.

Numnuts was developed by a team of research vets in the UK and Australia, with contributions from Meat & Livestock Australia, Australian Wool Innovation (AWI), the Moredun Foundation, CSIRO and the Numnuts founding partners.

If interested in being part of the pilot launch register interest at www.numunuts.co.uk 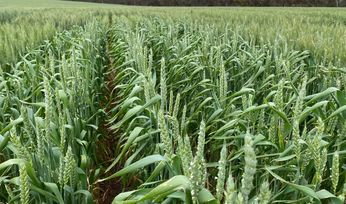 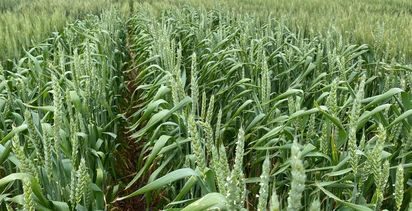