This is largely being driven by advances in soil management research and grower experiences in addressing the perceived challenges of:

In the medium to long-term, the soil improvements from CTF are delivering better water use and fertiliser use efficiencies and good weed control for some growers using chaff-tramlines.

The Grains Research and Development Corporation is investing in research to address practical on-farm CTF adoption issues through its ‘Minimising the impact of soil compaction on crop yield' project in collaboration with the Department of Primary Industries and Regional Development (DPIRD, which is part of the ‘Soils Constraints - West' investment.

It has also supported projects investigating the economics of CTF. The findings of the projects have shown the costs to switch over and match machinery operating widths can often be lower than growers expect.

Economist James Hagan, of the Department of Agriculture and Fisheries in Queensland (DAF), told the National CTF Conference in Perth in August that expenses can be contained by replacing machinery over time.

The National CTF Conference attracted more than 300 growers and industry stakeholders and more information and papers from the event can be found HERE.

CTF revolves around soil compaction management by creating permanent wheel tracks to clearly separate the crop zone and traffic lanes (known as ‘tramlines') in paddocks or across farms. Load-bearing cropping implements have a particular span, or multiple of it, and all wheel tracks are confined to the tramlines.

The key aims are to improve soil conditions in the crop root zone, encourage crop root growth, increase crop uptake of soil moisture and nutrients and get better machinery traction on tramlines.

James Hagan said benefits for individual farm businesses vary in scale and scope, depending on the existing farming system, absence or presence of other soil constraints and how wisely investments in machinery replacements are made.

He said the costs of moving to a CTF system can be contained with good long-term planning, including replacing machinery after normal usage patterns and ensuring operating widths fit the proposed CTF system.

INDICATIVE COSTS OF SHIFTING TO CTF

Previous national research has found the average broadacre cropping farm in Australia has machinery with a book value of $1-1.5 million.

"Replacing all headers, tractors, sprayers and seeding equipment in a single year to line-up operating widths for CTF would far exceed this amount," James said.

"Farm machinery will be regularly replaced, whether to fit a CTF system or not, and a more accurate way of costing the transition to CTF is to compare differences in machinery purchases with and without a CTF system over time.

"The same tractors and boomsprays used in a non-CTF system will be used in a CTF system, but may require modification to three-metre wheel centre spacing to match the header."

Tractors or boomsprays that do not have factory 3m centre options can be retrofitted, either by custom-made axles at an estimated cost of $20,000 or by spacers at a cost of about $800 each (or four for $3200).

Other new implements, such as airseeder carts and chaser bins, typically come with 3m centre wheel spacings by default - or existing chasers can be retrofitted with fixed 3m axles for about $2000, he says.

Chaser bins being used in CTF systems of 12m or wider may need an additional board or conveyor to enable the header to unload while keeping the chaser on tramlines. Auger extensions to the header are another option to accomplish this goal.

Historically, James said one of the biggest costs of adopting CTF was the purchase of a Real Time Kinematic (RTK) guidance system - at $20,000 or more.

But he says the rapid adoption of autosteer by Australian grain growing farm businesses means this is now less of a consideration.

The typical range in cost differences between CTF and non-CTF options is outlined in Table 1.

James said it is important to consider the compromises needed to make a CTF system work. For example, adopting a 12m (40 foot) CTF system may mean forgoing the harvest capacity of a potentially cheaper 13.7m (45 foot) front.

He said a 4000ha cropping program with a daily yield loss of one per cent during harvest, at an average wheat yield of two tonnes/ha and an average harvest speed of nine kilometres per hour for 14 hours per day (with additional time for paddock moves, refuelling, etc), would equate to a 15ha/day difference in using a 12m front compared to a 13.7m front.

"There are also potential opportunity costs of reduced seeding capacity, which could lead to delayed sowing and - as indicated by past WA research and trials - reduce potential grain yields by about 20-50 kilograms/day.

James said, in this scenario, every second seeder pass aligns with a header run - allowing most of the benefits of a full CTF system and higher seeding capacity to be captured.

Cost:benefit analysis by DAF Queensland estimates there is an annual net benefit of about $166,000 in converting to a full 12m CTF system for the example of the 4000ha broadacre farm if it shifted from a 12:13.7:30m ‘mismatch', as shown in Table 2.

James said the value of this benefit is sensitive to changes in penalty of traffic. For example, if the yield penalty was 15%, the annual benefit would be $60,000.

Topsoil compaction can be managed by changes in tyre pressure, tyre size, tread patterns and the use of tracks. But subsoil compaction to 30cm or deeper results from machinery axle weights of 10t or more.

James stressed that aside from not trafficking the paddock at all, the best option to manage this deep compaction is adopting a CTF system.

He said past research summarised by DPIRD officer Dr Stephen Davies on WA's deep yellow sandy soils has shown healthy crop roots in uncompacted soil can grow at a rate of about 1.4cm per day. But subsoil compaction can limit this by as much as 65% to 0.5cm/day.

The implications are that wheat roots growing in compacted soils are less able to keep up with the demand for water and nutrients and there is less total root volume and depth at plant maturity. This reduces total water and nutrients accessible by the plants when setting yield.

Some of the research results into effects of deep tillage on sandy soils in WA to address deep compaction is outlined in Table 3. It highlights a potential 330-650kg/ha (22-37%) increase in yield benefits from using a combination of deep tillage and compaction amelioration.

Dr Blackwell's advice for shifting to a CTF system includes:

CTF systems can be an economic option for managing subsoil compaction, according to James.

He said many growers who have adopted CTF show the initial cost can be typically less than $50,000 - with benefits greatly exceeding this value. "There is room for compromises that allow growers to reduce the percentage of their paddocks getting trafficked, while also allowing them to make use of wide scale machinery," he said.

Further details from his presentation to the National CTF Conference can be found, with other information and papers HERE. 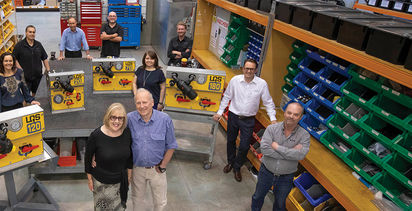