GOLDACRES has released a tracked version of its G8 self-propelled sprayer. Shown for the first time at the Speed Field Days in Victoria last week, the fully-tracked sprayer has a much larger footprint than when fitted with tyres. 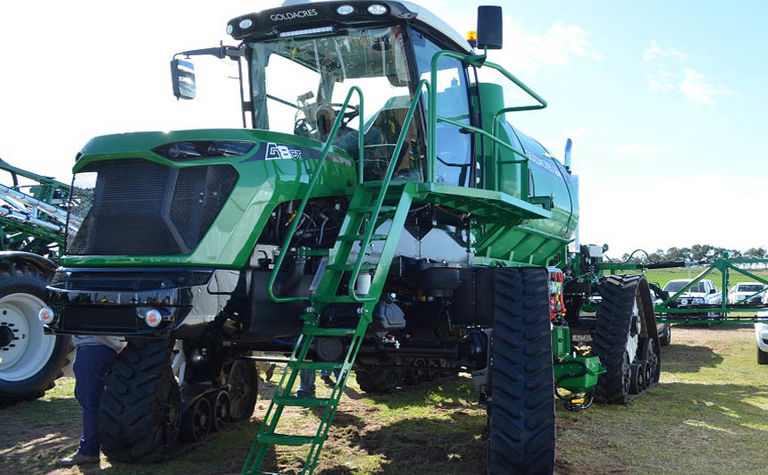 The G8 CT is fitted with four Soucy tracks and the tracks are 406mm or 16 inches wide. While the tracks are a little narrower than the stock 520/85R46 tyres fitted to the G8, the length of the tracks mean the sprayer's footprint on the ground is about double that of the tyres.

Tracks have become popular choices on many pieces of large machinery and they are now commonplace on tractors, combine harvesters, sprayers, air seeder carts and chaser bins.

Goldacres has made its own adaption kit for the tracks which means if required, the sprayer can still be fitted with tyres.

Apart from the tracks, the rest of the G8 CT is the same as the original G8 sprayer, which was launched by Goldacres last year.

The G8 CT is powered by a 6.7 litre Cummins engine which produces 194kW and the 3000 series, six-speed automatic Allison transmission is a larger, more heavy-duty version than those used in other Goldacres' Super Cruiser sprayers.

The hydraulic system is driven directly from the transmission to allow for suitable oil flow without the engine working at high revs, keeping fuel use to a minimum.

Fully loaded, the G8 is 20,000kg and the stated weight split is 50:50 front to rear. The model displayed at the Speed Field Days was fitted with a 48m boom which is currently being field tested.

Goldacres is the only manufacturer in Australia to produce a full range of self-propelled sprayers.