GOATS captured frolicking on a threatened Mallee fowl nest in South Australia and a deer using its antlers to ringbark a paperbark tree in Western Australia were just some of the images submitted to the Centre for Invasive Species Solutions, to demonstrate how feral pests are impacting the country’s native animals and environment. 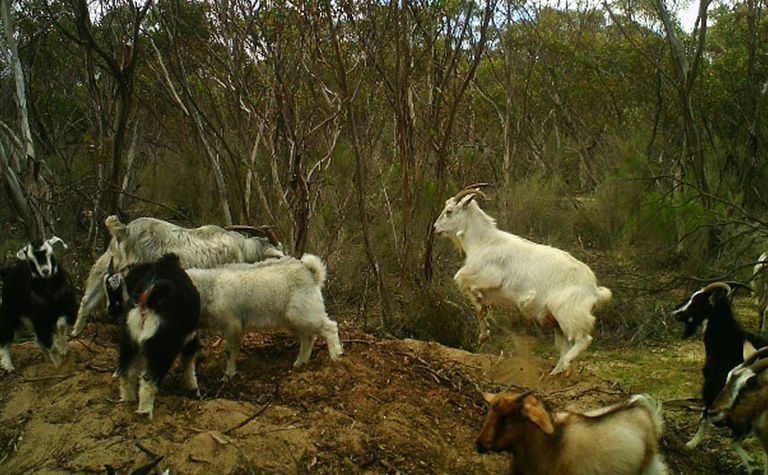 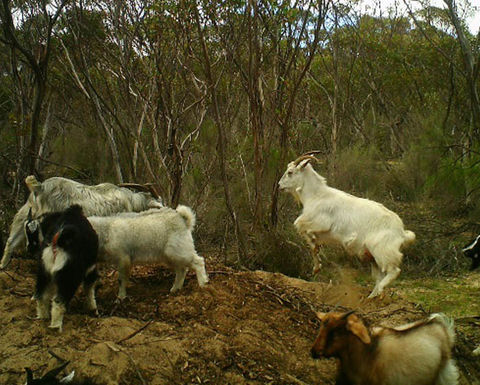 CEO of the Centre for Invasive Species Solutions Andreas Glanznig congratulated all the winners of its annual feral photo and video competition.

“These winning images show the devastating consequences of invasive species, and I am extremely pleased to hear that in all cases, local coordinated action is being undertaken to tackle these problems, and new and innovative tools are being used as part of the management solutions,” Mr Glanznig said.

The image of goats dancing on a Malleefowl nest was taken by Fiona Gray who monitors the threatened native bird species as part of her role as Regional Landcare Facilitator for the South Australian Department of Environment, Water and Natural Resources

“We were monitoring the nests as part of a collaborative feral predator control campaign in the South Australian Mallee, which involves landholders, the local Green Army and landcare coordinators,” Ms Gray said.

“We were trialling the use of canid pest ejectors in the region, and had remote cameras set up to see if feral predators, such as foxes or feral cats, would activate the ejectors,” she said.

“To my shock, as I was going through the images, I see feral goats jumping and dancing around right on top of the nest where the Mallee fowl eggs were laid. I showed the image to one of the local landholders who took it upon himself to trap and remove the feral goats using our mobile goat yards and, I am pleased to say, the Mallee fowl did return to the nest.”

The image of a red deer destroying a paperbark tree with its antlers was entered by James Gummer who captured the image with his trail camera in the Murray Shire of Western Australia.

“While deer numbers may be low and isolated in the region, they are certainly having a negative impact on the local wetlands they inhabit,” Mr Gummer said.

“We see evidence of deer trampling protected plants, muddying areas used by native frogs as homes, and ring barking trees by rubbing their antlers against them – which as my image shows, causes severe defoliation and even death of the trees,” he said.

“Deer can be a major problem in these protected areas, so I am glad to see that deer are now being managed accordingly.”

This year the Centre for Invasive Species Solutions also opened its competition to weed photos.

The winning image was one of a Cats Claw Creeper taking over the banks of the Timbarra River, near Drake NSW by Mandy Craig.

Cats Claw Creeper is extremely deceptive - it looks harmless, but they can form a dense mat and smother large native trees until they die.

“The impact is two-fold – as the tree dies and collapses along the river, it can also cause severe erosion and instability around the river banks, impacting the whole river ecosystem.

“Landcare has been undertaking control of this weed in the area for a number of years and has now established a containment line.

“In the past nine years, when funding is available, we have used contractors who manually remove the weeds. However, when it gets to this stage, like in the photo – it is extremely hard to eradicate.

“The local landcare group is now considering biological controls as a course of action, and we are seeking further expert advice on this,” Ms Craig said.

Ms Craig reiterated that while some weeds can look pretty, when they get to infestation level, they are extremely damaging to our native environment.

“The Cats Claw Creeper flourishes as a yellow flower which many people think are native, however I do recommend that anyone who thinks that they might see Cats Claw Creeper in their area to alert authorities so that appropriate action can be action before it is too late”. 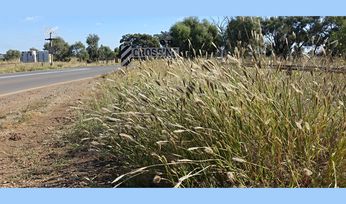