ONE of the largest pieces of machinery shown at the recent Wimmera Machinery Field Days in Victoria was a new 150-tonne capacity mother bin, exhibited by Dunstan, Kerang, Victoria. 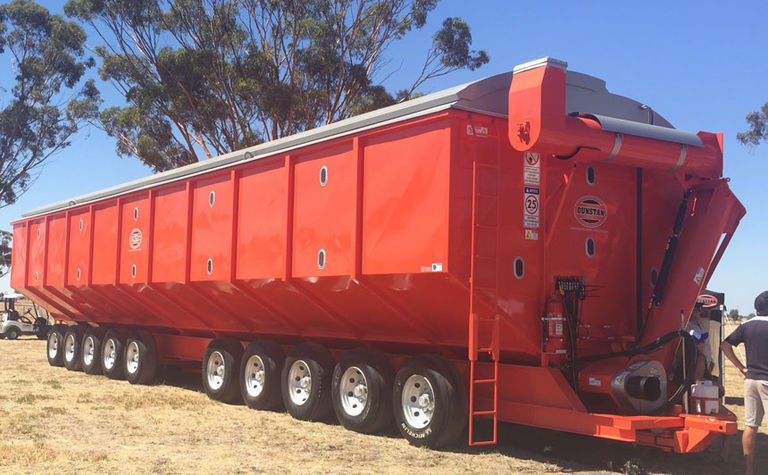 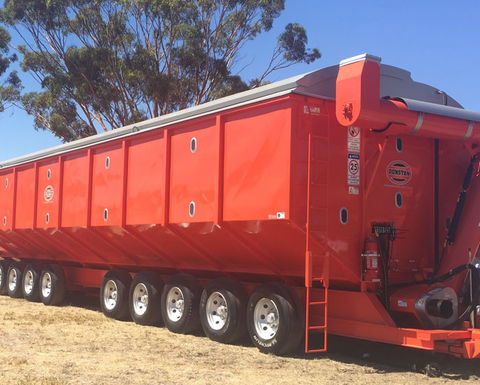 At 19m in length, the bin has optional steerable rear axles to make moving it around easier and it can handle being towed with 50 tonnes of grain. Front axles are also steerable.

As the front wheels steer, they are linked to the rear axles by two large tie rods which make the rear sets move the other direction to the front sets of wheels. Dunstan’s Craig Miller said the front and rear sets of axles have an equal and constant pressure on them via the tie rods and linkages to ensure a tight turning circle.

“It cuts the turning circle in half compared to the non-rear steerable bins and it’s much easier on the tyres and the ground,” Miller said.

Fill height is 3.5m, up 300mm from the rest of the range of Dunstan bins. Fitted with a hydraulically-operated, steel lid, overall height is 4.2m. The unloading auger is 405mm in diameter but can be optioned up to 510mm.

Miller said other developments on the drawing board for Dunstan include a triple axle, 50 tonne chaser bin.

Local and imported chaser bins have been thoroughly checked over by the Kondinin Group.

Research team gets a big dose of bin time